What is an Arduino and Why do you need one? 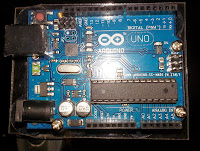 If you haven't heard of an Arduino, then your in for a treat. All those little projects that you have thought up in that complex brain of yours but have never quite been able to figure out how to control them all. Well the Ardunio R3 will do it for you. Automation should be a huge keyword when dealing with an Arduino. Keep reading for the amazing details. Oh, Did I mention its only $15 too?

What is an Arduino?
If you lookup Arduino up on Wikipedia you get the following quote. 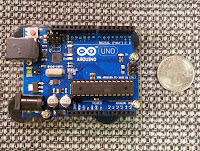 Yeah its a bunch of Gobbledy Gook to most people, and doesn't tell you a whole lot. So in very basic terms an Arduino is a small, affordable microcontroller that can be used to automate and control all minds of electronic and items. Using a simple piece of software on your PC your going to load a program into the Arduino that tells it what to do. Yu hook the Arduino to things you want it to monitor and control. Simple right? Actually it is very simple once you research it a little bit.


So what exactly does it mean? Lets start with a list of projects you may want to tackle.

Projects
Arduinos are regularly used in the control of robotics projects, but you don't have to be a robotics student to enjoy the power and fun this little thing can bring to you. Though it can run the most complex and intricate robots you can think of.

At the time of this writing, we are approaching Christmas and everyone is checking out those Automated light controllers that sync the lights to music and flash them in time with it. Now you could spend a couple hundred bucks buying someone's really kewl light control system or you could spend less that $50 and build one yourself.

How about an automatic night light controller, or an Ethernet controlled lamp. DMX control of stage lighting or your household lights. Thermostat controller? How about a timer to turn your basic coffee maker into a ready brew machine. Plant moisture monitor that sends a text message to your phone? The list goes on and on.

Shields
No, were not talking about Scotty raising the shields on the Enterprise here. What the Arduino does
by itself is process information and from the code you load into it turn things on and off, monitor sensors, reports on situations etc. But how it interfaces with your projects is largely the result of add on shields or boards that stack one on top of another on the basic Arduino board. You can connect directly to the Arduino's ports for sensor and relay, but if your controlling anything that requires any power your going to have to shield it. Shield can be interchanged with expansion pretty easily for this purpose. What I have learned is that a Shield in a one way shields the main controller from me and you. When I shorted the wires together on my first motor project, I only cooked the $5 motor controller board, not the Arduino itself. But I was able to repair the shield very simply by replacing a $2 part.

The list of shields out there is amazing. Motor Controller, Dmx Light Controllers , Motion Sensor, internet shields, Ethernet shields, and on and on and on. The great part is most of them you can build yourself with a little ingenuity, some spare electronics parts and a soldering iron.

Connections
The Arduino connects to your PC using a standard USB cable. You upload your code with this cable as well. Power can be either from the USB cable or using the built in power plus and a Wall wart or a battery pack. It will run a long time on batteries alone. Another plus.

The rest of the connections are made using pins on the board. The shields plug right into these and they usually provide screw connectors to your devices. Most shields can be stacked on on top of another to add features as you need them. For example I could add an Ethernet Shield to my DMX controller shield to use it as a web based light controller to turn the lights on or off when were away. 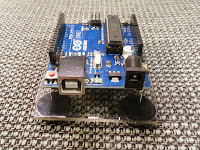 about microprocessors. It made sense too. Why place a student in a position to fry a $1000 Allen-Bradley controller when you don't have to.  So the price has dropped over the years to where it is now and the community support for projects is enormous. There are hundreds of sites with thousands of lines of code to do just about everything you can imagine.

Knockoffs
As with everything there are going to be knockoffs of the originals out there. The same holds true for the Arduino. The originals are made in Italy and are arguably the best. The problem is that the knockoffs are getting so good lately it is very hard to tell the difference. If you get a good one and can learn from it, that is all that matters. You can occasionally have troubles with code not running right on some models.

Summary
GET ONE! yea they are fun, they are a blast to mess with, you'll waste a lot of time and maybe even a  little money, but you will amaze people with your kewl little projects too. Definitely a conversation piece to have around. Then when you couple it with a Raspberry Pi you have a whole new level coming around. Yeah I said Raspberry PI. Yet another little computer project that will amaze you.

So get your Arduino and have a ball. Just make sure you come back and tell me about it.