Anyone familiar with Brad Keslowski knows he has a rep as sort of a Bad boy, bad driver and bad whiner. Apparently whoever oversees the Spell Check in Google Chrome is not a real fan of him either. When ever his named is type in Google Chrome it is marked as a misspelled word and when you right click it you get the word slowpoke as a replacement.

If you mess up and leave off the w in the last name kesloski you get an even more appropriate word. SnakeSkin. Good to see the fine people at Google have  sense of humor.

Posted by Unknown at 5:29 PM No comments: 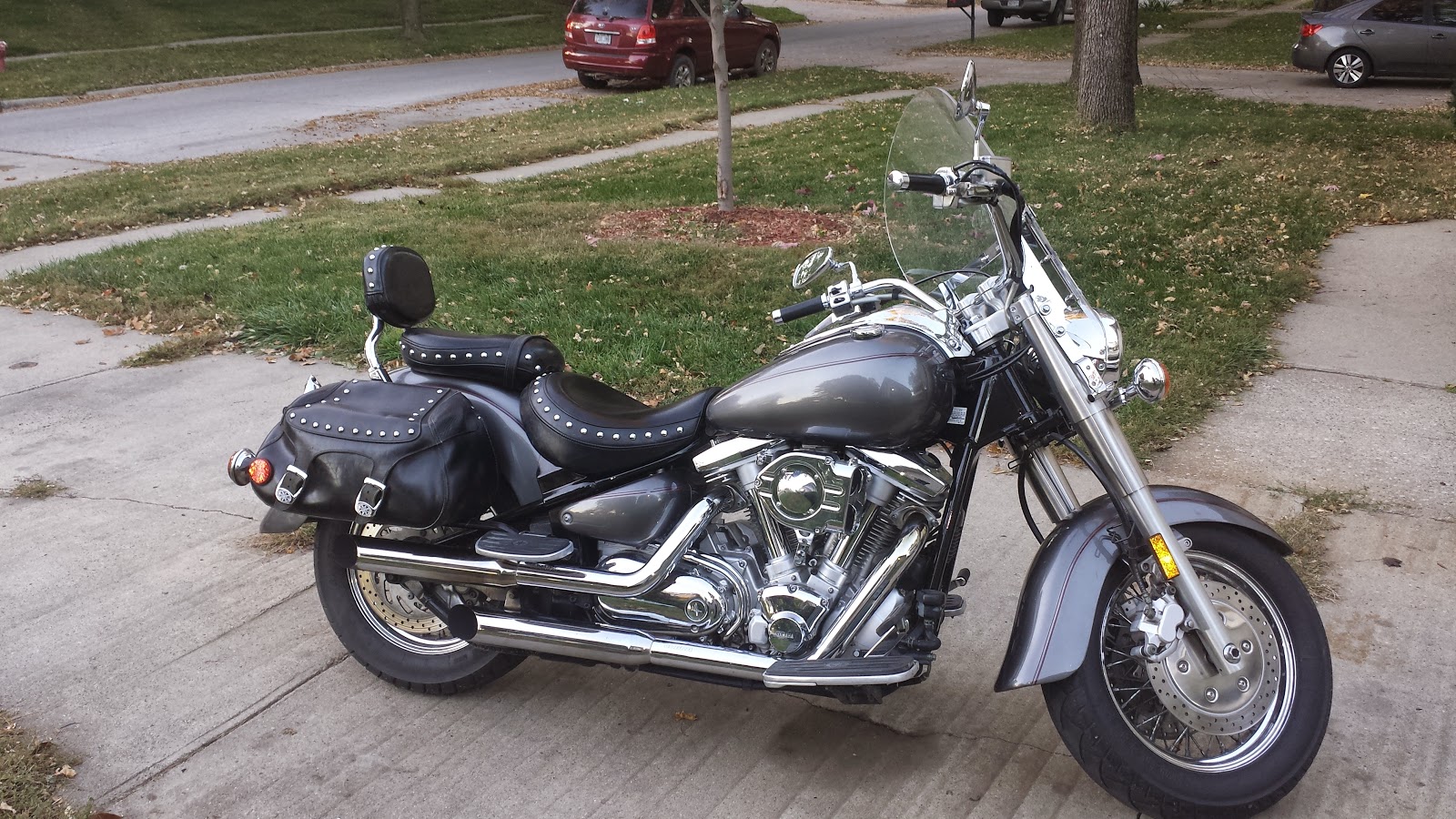 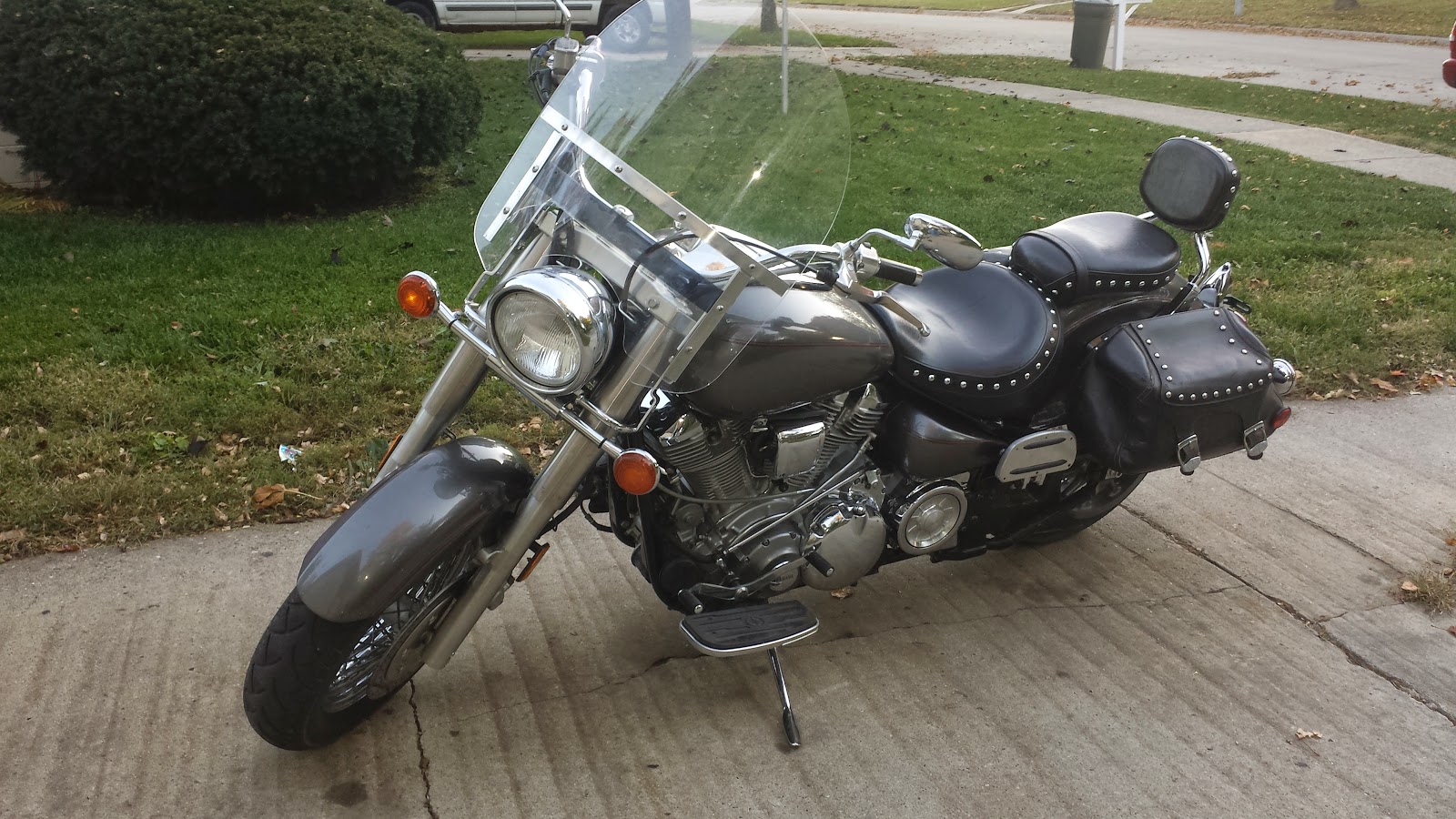 I picked up a used bike the other day and decided to share some info about with everyone. It is a 2003 Yamaha Road Star 1600 Silverado, Model # XV16ATR-C. It has 62,000 miles and has been upgraded with a few extras.

I have added a trunk so the wife feels more comfortable. Still have to add the luggage rack to the top though. 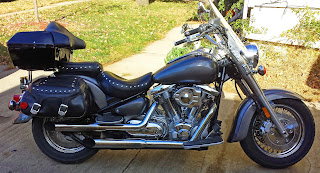 Just picked up Some luggage from an auction for $10.89. It was pretty rough when I got it. 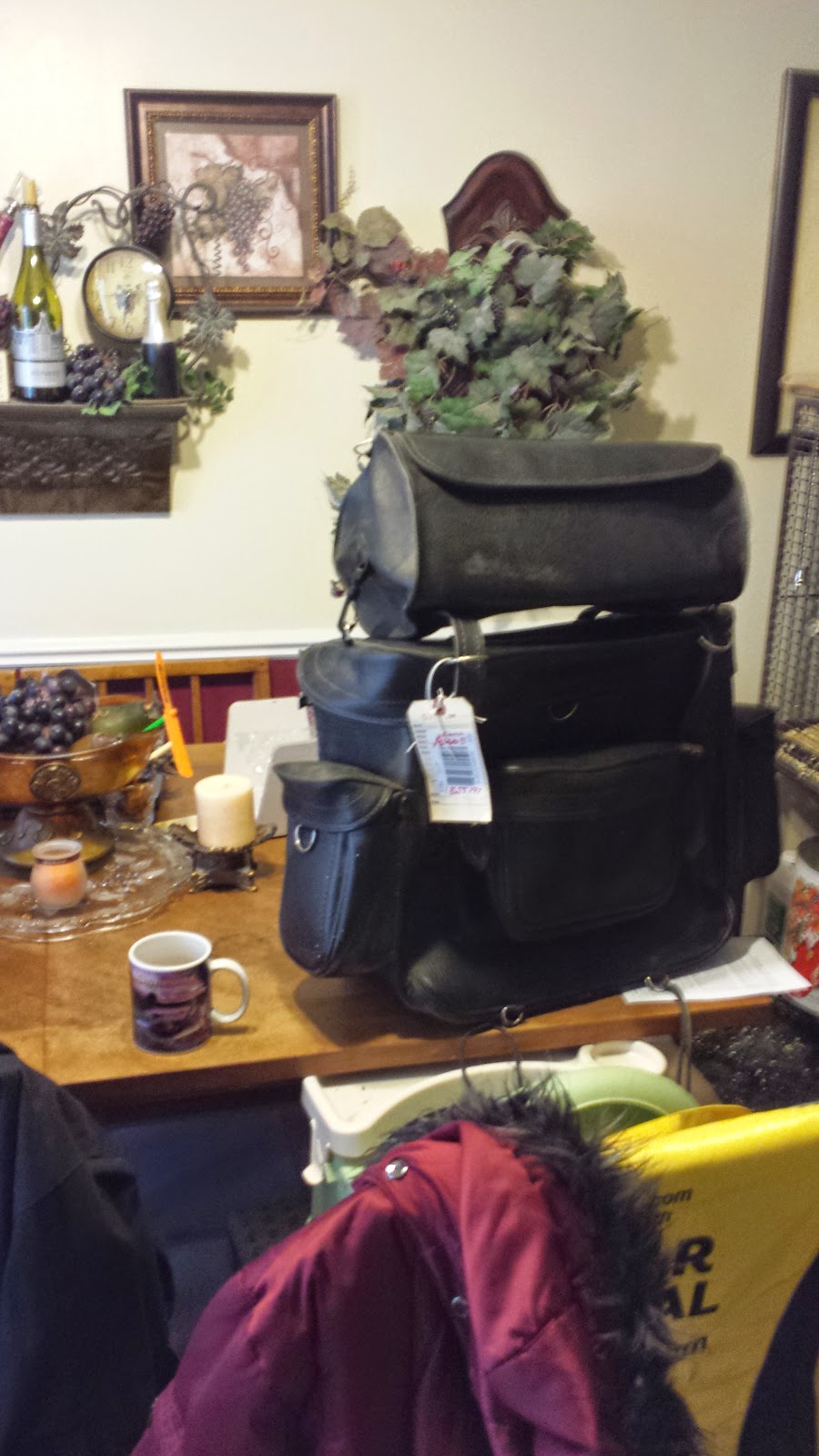 But with a little cleaning and reshaping I got it looking better. 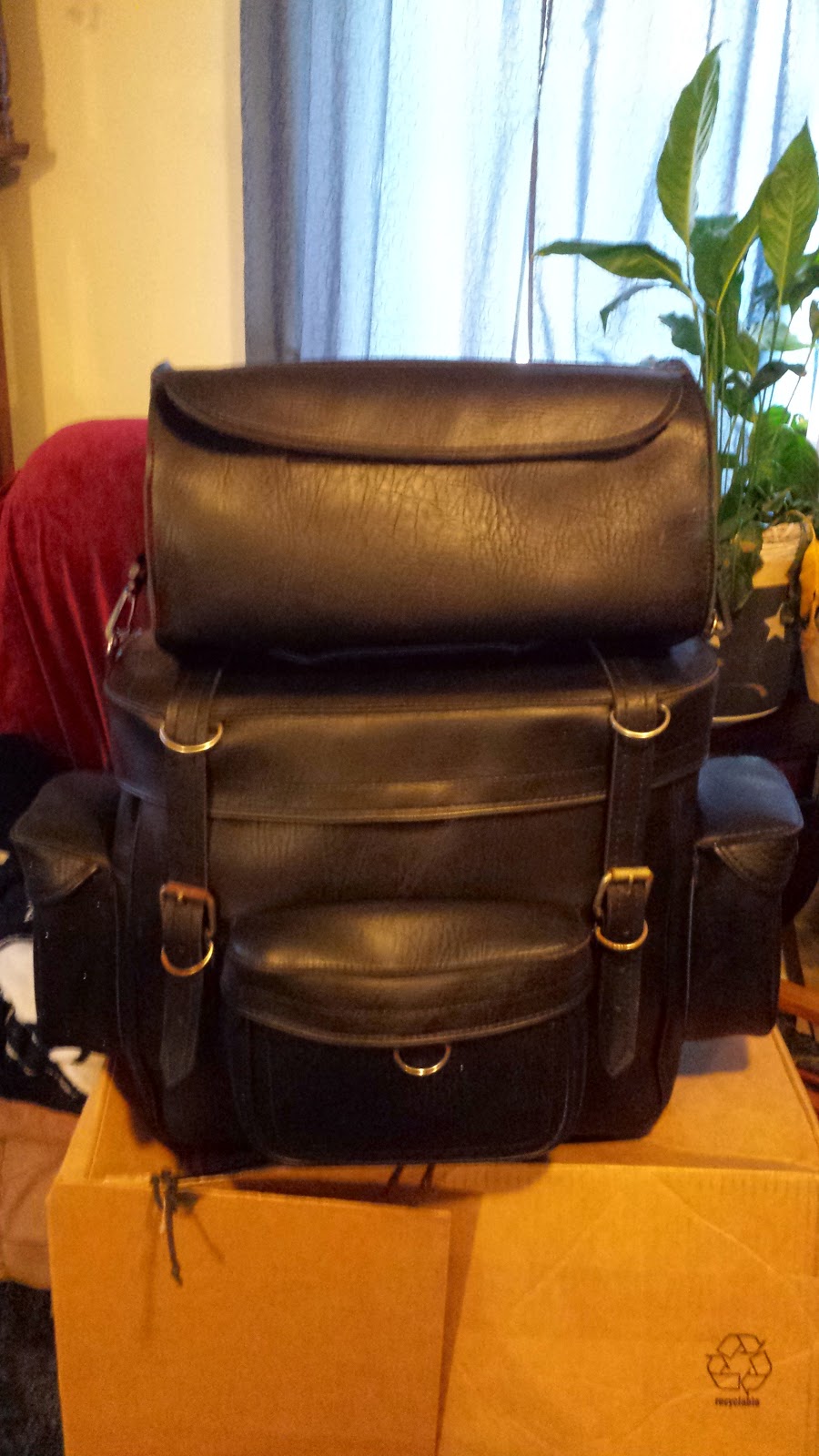 New Shock I plan on installing from an old Gold Wing. 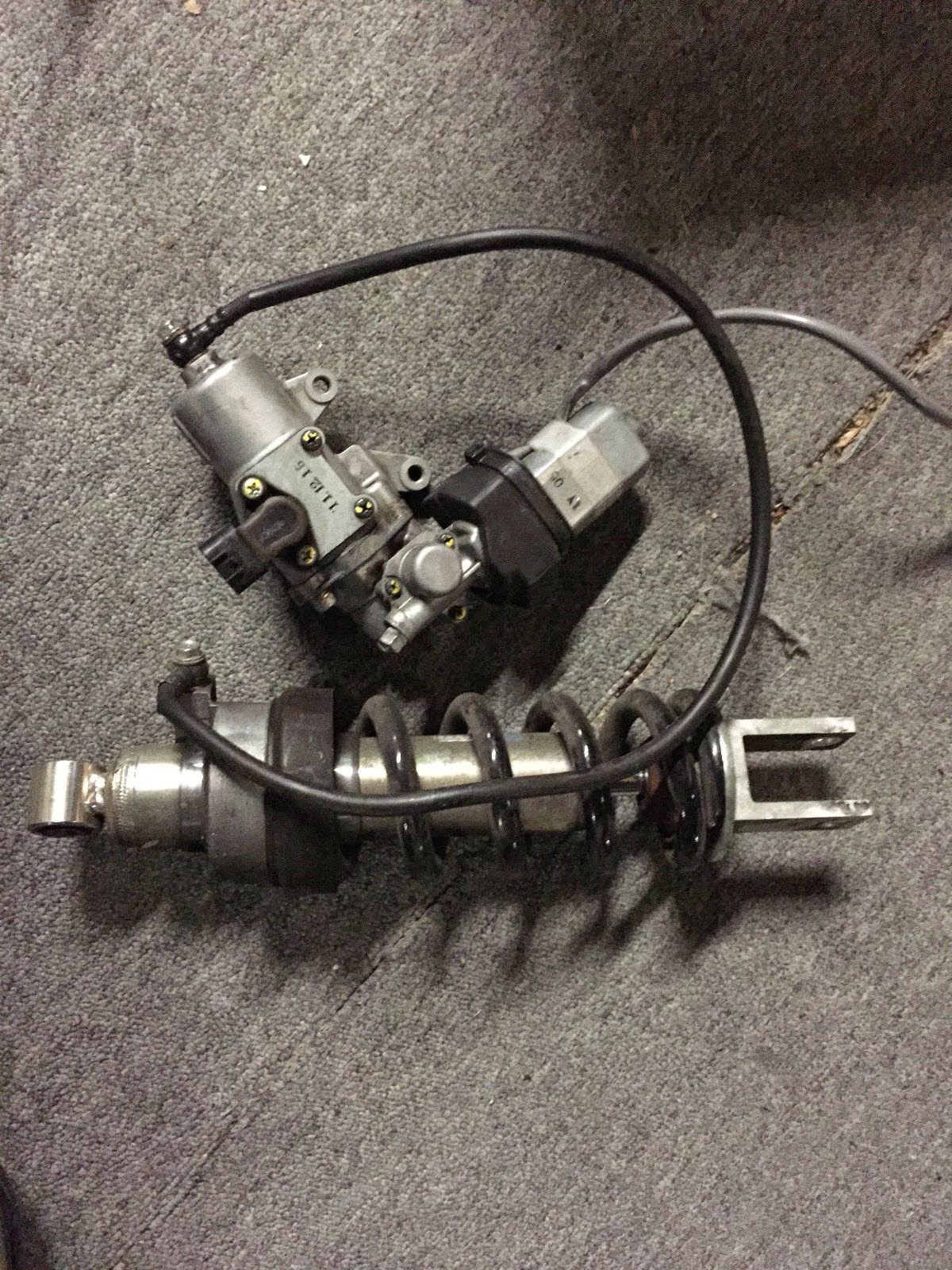 After a lot of hours, a little Money, Here is the completed project bike. 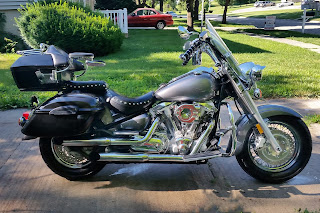 Roadwing installed, Baffles removed from the Cobra Slashcut headers. Factory Hard Bags Painted and installed, E-bay Trunk, Kury Armrests designed for a gold wing. 10" Mini Apes. Chrome one Piece Risers. ISO Grips. Cobra Crash Bar with Fury Highway pegs. Custom homemade lowers (by Me.) Though they are not in this pic. I was working on them at the time. Rockford Stereo.

This is After installing the FLH trunk I rehabbed from Ebay. $125 for the beat up trunk, $25 for a little lacquer paint and a lot of hand Rubbing. $90 for a factory Harley pillow backrest for the wife. It also now shows the 82nd Airborne graphics I cut and applied to the tank.
Shinko 777HD rear made it about 8000 miles, swapped out for a new one.

Posted by Unknown at 3:49 PM No comments:

Do authors write their own books anymore?

For years I have followed several authors that I called my favorites. Tom Clancy and Dale Brown are a couple of them. I do read just about everything I can get my hands on, but like everyone else, I have my favorites that I am always looking for. But then I started noticing a trend, and not a good one in my opinion. I started seeing Tom Clancy with some unknown writer. Dale Brown and so and so. I also started noticing a trend with the writing of these books. Yes the characters were the same, the storylines were there, but the quality of the work was not.

You get comfortable with an author because they lead you down a path and tell you a story that keeps you heading in the right direction. They guide you to an ending that either surprises or baffles you. So the more you read of a particular author the more you look forward to the next twist and turn in the path and seeing how they are going to mentally challenge you next. As a result you also look forward to that next tome in a series that follows a particular lines of characters. You get familiar with them, comfortable with them. You laugh, cry and root for them in the end. So when they change, you notice! When a new author writes about them you can tell, feel and see the differences. Even when the name on the cover is that same (at least one of them), you can tell something isn't right.

Why are they doing this?
Well the obvious answer is money! Do not get me wrong I am not claiming the authors are money grubbing villains here, though I am sure some are. I think it is more a testament to the publishers being a bunch of money grubbing thieves that are providing us with a deception ridden pile of novels that are no more written by the authors represented on the cover than Elvis is alive and well in Las Vegas doing Thursday night double headers at Caesars Palace.

These publishers are deceiving you into believing that your getting a true blue Tom Clancy novel, when in fact you are getting a Tom Clancy 'CONCEPT' that is written by some other two bit hack that the publisher was able to hire for pennies on the dollar. Ok, two bit hack might be a bit strong, but when I am deceived I get upset about it, and I want you to get upset too. There are obviously some good Co-authors out there or the novels wouldn't sell at all. But lets read their novels with their names only on the cover, not the duplicitous drivel the publishers are ramming down our throats as genuine top grade novels.

Pure Deceptions from the get go.

. Right on the front cover in Gigantic letters, "Tom Clancy". Leading you to believe that Tom in fact wrote this novel. Underneath this prominent header in a font one tenth the size are the words "With Mark Greaney". Ok so now we are led to believe it was co-authored with Mark and Tom.

Here is where you picture Tom and Mark sitting at a table talking about plot lines and sharing ideas. Happily deciding which way to go with the next twist and double checking each others work. Which is a load of crap. These guys didn't sit down and co-author these books. Tom Clancy wrote down a page or two concept on an idea form. The publisher hired Greaney to WRITE the novel following the concept written by Tom. Tom checked off on it after the editors made it sound more like Tom's writing and the publisher cleaned up from it. You then paid Tom Clancy Prices for a new novel written

by a new novelist no one had heard of at the time. There may very well be some of Toms writing somewhere in the book to make it legally legitimate, but the best guess out there would be it is a LOT less than the 50% that the term Co-Author infers is written by him.

Are the co-authors any good?
The Short answer is yes the co-authors are good or at the very least passable authors. Mark Breaney is a decent author in his own right as represented by his best selling novel 'Dead Eye' . But when he was relegated to writing what Tom Clancy and the publisher said he should write, the story lines were overly complex and fraught with errors. Reviews to this effect can be found everywhere on the web. The reason authors like Tom Clancy are so renowned is that they rarely make mistakes in story lines and plots. Names are not messed up between novels, you never find a story line that just end in the middle of no where, or never develops at all after being introduces.

Publishers also used to take their time and make sure their were no major errors in a novel. Oft time delaying the release of a book because of a last minute error that is found.

Other authors do not gain this talent, it is something you must have to start with. You can improve upon it by telling simpler story lines or having an amazing editor that catches such things. But in todays cookie cutter literary publishing system, it seems to be that more and more errors and lack of continuity are being allowed in return for speed in publishing. An author who doesn't 'publish' 3 - 5 books a year is not a good investment in the publishers eyes.

I did a little research, that showed me some things. I looked at Tom Clancy's publishing history. At the time of this writing I counted Tom released novels at 102 different items published from 1984 to 2014. Of those, more than half, 53 to be exact were published within an 8 year period, with a peak of 11 tomes in one year in 2000. The years before and after that era average 2 to 3 books a year on average being published. So are we to believe that in 2011 Tom gained super human writing ability and wrote more than every other novelist on the planet, or that he had this many novels stashed away waiting to be released?  No, the fact of the matter is that the majority of those were written by Co-Authors. Steve Pieczenik wrote the majority of those 2000 released books. Jerome Preisler another. The only Novel I can find penned by Tom that year was "The Bear and the Dragon", and reviews of it were less than stellar.

Why buy into it?
The biggest problem in this situation is you and me, the readers. We keep buying this snake oil packaged as a miracle cure and keep shelling out our hard earned dollars, for in my opinion an illegal marketing technique that obviously confuses and deceives the readers.

So I call for a boycott of all Co-authored novels that are not equally billed on the cover. Start supporting the authors that actually come up with their own story lines, write their  own words and do not try to deceive us. There are so many up and coming authors that tell amazing stories and they deserve your money much more than the ones who deceive us. Stop supporting the hypocrisy and read some good novels.

I also call for the Authors to stand up and stop the deception. We want books written by your hand, or typed by your fingers. we want the story told as it comes out your twisted, brilliant, strange or just wonderful minds. We do not want to or will we stand for being deceived by the practice of Co-Authoring. There is no such thing. I have yet to meet two creative minds that could ever agree on releasing the same thing, written word or otherwise.

Posted by Unknown at 1:34 PM No comments:

No you didn't read that incorrectly, I built a good quality metal head and tail, carbon fiber chassis Trex 450 clone helicopter for under a hundred dollars. This particular kit is a Hausler Version 2 Belt drive metal head and tail kit. I used a few of my own parts from flying remote control airplanes and bought several more using a mixture of Amazon and eBay to get the price down to what is a pretty affordable 450 class helicopter. Considering its non-clone equivalent is over $500 this sounds like it should be a fun build. 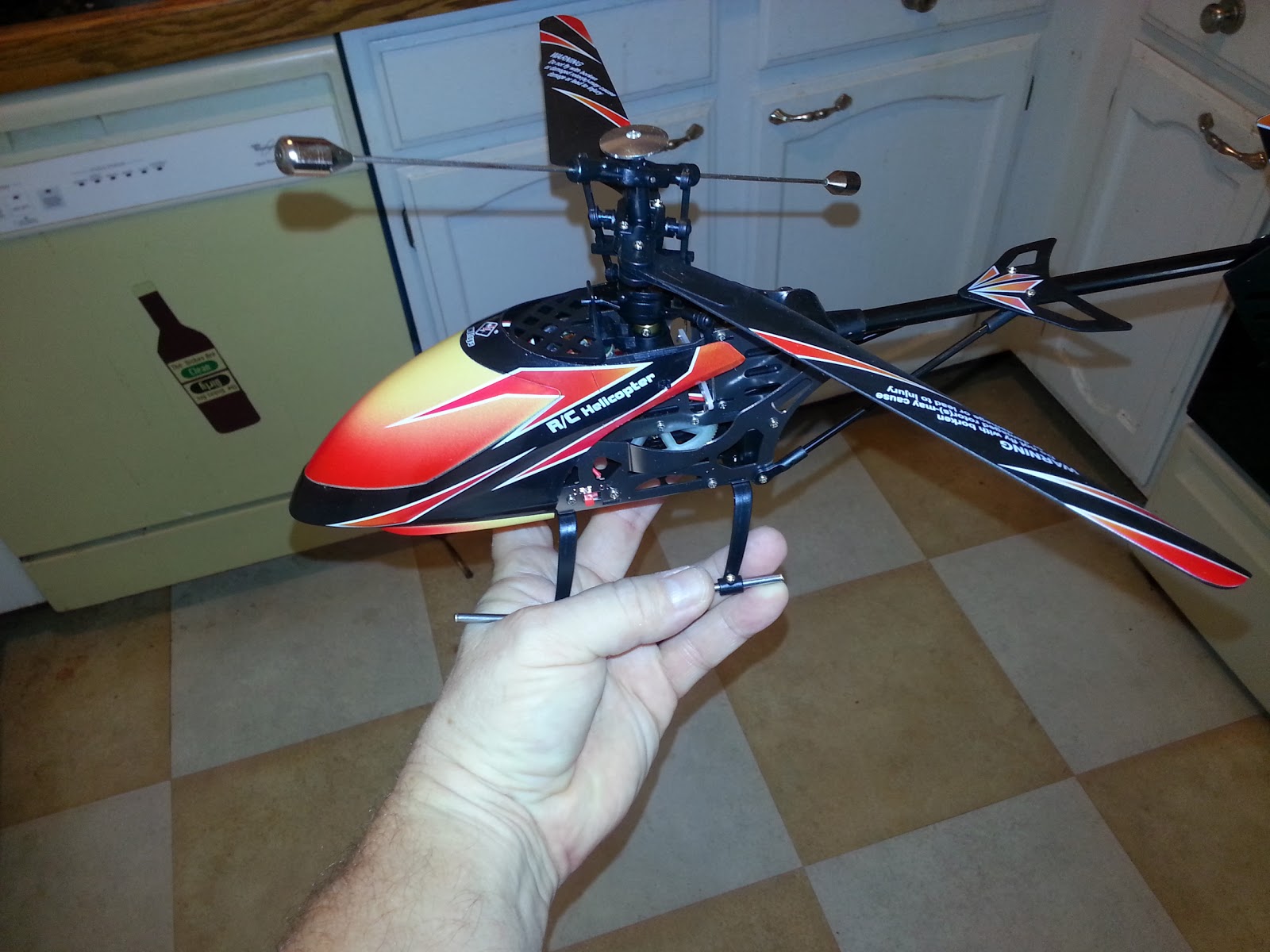 A while back I wrote an article and did a video on binding a WlToys V911 Helicopter to and FlySky FS-T6. Everyone knows that the factory transmitters that come with the Wltoys and equivalent brands will work to fly these heli's but they are not exactly a precision instrument. So when you can bind them with a better more precision radio it is that much better. Which is what we are going to show you here with the V912.

Bind a Flyskty Fs-T6 to a V911 Helicopter

If your one of the proud owners of a new FlySky FS-T6 Transmitter and you want to fly the V911 style helicopters, it is your lucky day. This is a procedure on how to bind your FlySky to the V911 style of Helicopter. The factory controller is a decent enough transmitter, but you have so many more options with a more professional model like the FlySky.